The only other situation where you really find major nutrition without calories is with spices such as cinnamon, cloves, cardamom and ginger. Cinnamon has many health promoting effects including;
​
​

Anti-oxidant: Cinnamon spice not only improves food palatability, but it is among the top 5 natural food sources with the highest level of anti-oxidants. It contains 6,960 units per teaspoon. Anti-oxidants reduce the formation of "Free Radicals" that cause cancer.

Alertness And Memory: Consumption of Cinnamon improves response time and memory recall. Just smelling the wonderful odor of this sweet spice boosts brain activity! Cinnamon may keep you more alert and decrease your frustration when you are behind the wheel.

Anti-Bacterial: Cinnamon is effective in inhibiting bacterial growth. This is one of the reasons why it is widely used in food preparation in hot Asian countries. In addition to great flavor, Cinnamon in combination with other spices like Turmeric and Chili may have been an indigenous solution to preserve food without a refrigerator.

Cold And Sore Throat: Traditionally cinnamon has been used to provide relief when faced with the onset of a cold or flu, especially when mixed in a tea with some fresh ginger.

Blood Sugar Level: Adding cinnamon to the food in general lowers the gastric emptying rate and significantly lessens the rise in blood sugar levels after eating. The active ingredients in cinnamon not only stimulate insulin receptors, but also inhibit an enzyme that inactivates them, thus significantly increasing cells' ability to use glucose.

Blood Thinner: "Platelets" are blood cells whose function is to stop bleeding in case of physical injury. Under some circumstances they can make blood flow inadequate if they clump together too much. The essential oil in cinnamon helps to prevent unwanted clumping of blood platelets by thinning the blood.

There are 4 different species of "Cinnamomum" trees;


What Ceylon and Cassia do not have in common is their Coumarin content. Coumarin is a naturally occurring plant component that can be toxic to lever in large amounts. It is not found in significant amounts in Ceylon cinnamon and there is not enough data on the other two. 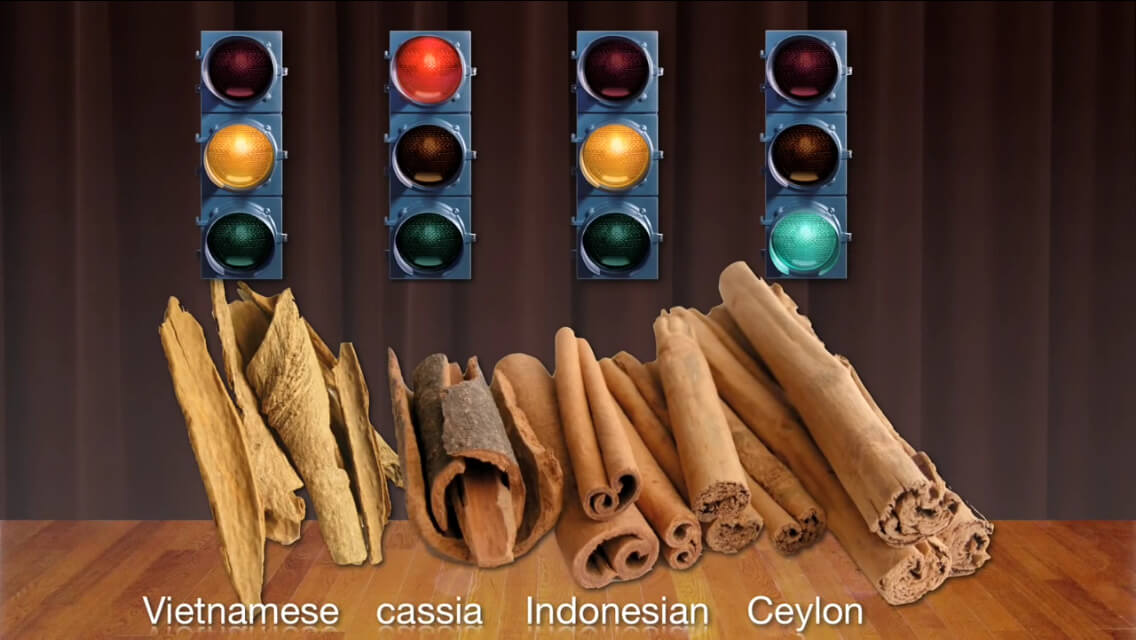 These traffic lights are only for people going out of their way to add a teaspoon or more to their daily diet. So if you are eating cinnamon every day, great— just make sure it’s the right kind.

Excessive use of the cinnamon may cause inflammation of taste buds and gum swelling.

Cinnamon is hot in nature and available all year-round. While the sticks can be stored for longer, the ground powder has a stronger flavor. If possible, smell the cinnamon to make sure that it has a sweet smell, a characteristic reflecting that it is fresh.

Cinnamon should be kept in a tightly sealed glass container in a cool, dark and dry place. Ground cinnamon will keep for about 6 months, while cinnamon sticks will stay fresh for about one year. You can extend their shelf life by storing them in the refrigerator. Just like with other dried spices, try to select organically grown cinnamon.
​
​
Sources
Image Credit